Thanks to the hard work of Betty Apes, Barry O’Connell, and others, a link connecting the Maori descendants of Elisha Apes and his Mashantucket Pequot roots in Groton, Connecticut was established in the 1990s.   To be sure, Elisha’s story is rich – like the stuff legends are made of  – and begins to connect indigenous communities and experiences across space and time.  A perfect story for the Indian Mariners Project!

It was back in 1839 when Elisha Apes, near the coast of New Zealand, confronted the captain of the New London, Connecticut-based whaleship Ann Maria over his mistreatment of the ship’s apprentice boy.  After a brief struggle with the mate, Apes, “an exceptionally big and also very powerful man…[stormed] into the Captain’s cabin and took possession of the firearms.”  He and the ship’s carpenter (with whom the initial conflict began) agreed with the captain that they would be “put ashore” at the nearest port.  As the Ann Maria approached land, the two men then took a whaleboat with “all their belonging stowed away aboard, firearms, tools, food” and other supplies and rowed into Port Chalmers.  There he began a new life in the midst of massive change. Within a year of Apes’ arrival in New Zealand, the Treaty of Waitangi (1840) was signed by Maori leaders and New Zealand was officially (though problematically) absorbed into the British Empire.  This agreement precipitated a massive dispossession of the indigenous Maori.  Though Apes continued maritime labor for a time, he eventually turned his attention to the land after marrying Mata Punahere, one of the local Ngāi Tahu.  The couple had eight children…

On Wednesday, June 19, my daughter Macie and I met with the Ngai Tahu (Maori) whakapapa (or genealogy – sounds like fakapapa) unit to discuss my research relating to Elisha Apes and the Indian Mariners Project and to introduce to them the histories of the Pequot and other Indian communities of southern New England and Long Island.  The whakapapa meeting involved Arapata Reuben, Terry Ryan, Jennifer Walsh (Apes), Robyn Walsh (Apes), Joseph Hullen.  I had coordinated my meeting with Arapata who informed me about Ngai Tahu protocol.  When we arrived at the office in the old Christchurch airport control tower building, Arapata greeted us and let us know that  “One of our elders will mihi (welcome) you and then you have the opportunity to reply.  At this stage you may wish to koha (an expression of thanks for the hospitality of the hosts, in the form of a gift) we will also koha to you for the sharing of your knowledge you will be sharing with us… We will then all Hongi (pressing of the noses and foreheads) you and your daughter. In the hōngī, the ha, or breath of life is exchanged and intermingled. Through this physical exchange you will no longer be considered manuhiri (visitor) but rather tangata whenua, one of us, the people of the land. We will then break for Hākari (sharing of food) after which you can start your presentation.”

During my presentation and subsequent discussion, we all quickly recognized the shared colonial experience between New England and New Zealand.   For me, it also became apparent that many more foreign whalemen (and sealers) married Maori wahine (women).  We all agreed that continuing a conversation relating to history, genealogy, and – more broadly – an educational exchange would be in our collective best interest.  Additionally, this collaboration may also yield other stories about American Indian mariners which has been suggested by some of my Wampanoag and Shinnecock friends in recent conversations.

As some of the worst winter weather in 20 years was fast approaching, Macie and I left Christchurch and headed south towards Dunedin – the area where Elisha Apes relocated.  We arrived at Betty Apes house late Thursday evening and were welcomed by Betty, her home cooked meals, and warm beds. [A note: Betty’s husband Erwin “Joe” Apes was the great grandson of Elisha Apes].  On Friday, we were supposed to go to the Huirapa Marae on Apes Road in Karitane (just north of Dunedin), but we were snowed (more like iced) in at Betty Apes house. Instead Betty hosted several Maori/Ngai Tahu and others at her house – Kane Holmes-Haweturi, his daughter Vaiaio Holmes-Haweturi, Gisele Karitai, and a family friend Norman.  Three guests including Anna Gorham, Margaret Henderson, and Brenda van Strick (the latter two are sisters) all descend from Elisha Apes.  Like, my meeting with the whakapapa folks in Christchurch, we were greeted with hongi and spent many hours talking about the history of the Indian communities in southern New England and Long Island. They, too, were fascinated by the shared experiences between their iwi (tribe) and those half a world away.  We exchanged and conversed about gifts and also agreed to continue this relationship to learn from one another.

In the evening, Macie and I went into the city to shop for gifts and met Ewan Duff, a Ngai Tuhu artist who patiently entertained my many questions about his work with pounamu (New Zealand nephrite jade or greenstone; See Ewan’s website at www.authenticgreenstone.com/licensed_artisans.php).  We later went to the Otago Museum (www.otagomuseum.govt.nz) to celebrate Puaka Matariki 2013 with a modern dance performance. Puaka Matariki is “the mid-winter Māori New Year observed after the rising of the star Puaka, the constellation Matariki and the following new moon.” In the morning we met again with Kane, Vaiaio, Betty, and Norman for a special tour of the Toitu Otago Settlers Museum (www.toituosm.com). Before we entered the first exhibit we encountered a gigantic river worn pounamu that people were encouraged to rub. Next to it was a photo of Ewan Duff, the individual who found the stone in the west coast mountains. In fact, the stories and/or art of Ewan, Kane, Gisele and Brenda could be located throughout the museum.  In the museum was the Maori Girl, a shore whaling boat operated and later restored by James Tiemi Apes, the son of Elisha Apes. Also known for his legendary size and strength, it had been recalled in local histories that Tiemi could carry the 30-foot boat on his shoulders and more than that set records for the number of sheep he could sheer in a day. 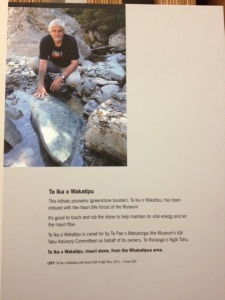 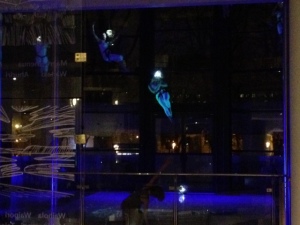 We left the museum for a short time to visit 87-year-old Jim Apes in the nursing home up the road. His likeness to his grandfather, Tiemi was remarkable and it was easy to see from his massive hands that in his youth he was just as big and powerful. Known as Gentleman Jim, he was quite lovely and willingly shared memories of growing up on Apes Road in Karitane and of his grandfather.  On our return to Toitu we able to continue the Puaka Matariki festivities and watched Maori singing, dancing, concluded with a haka (or war dance).

On our return back to Christchurch on Sunday, we stopped the Te Ana Maori Rock Art Museum (www.teana.co.nz) in Timaru. We were given a tour by Natasha Frisby who happened to have a familial connection to Arapata. She gave a wonderful tour of the rock art exhibit where we saw many other types of art created by Ewan Duff and other Maori artists. 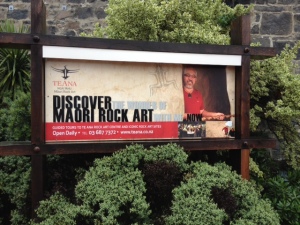 New Zealand is a beautiful country with a rich history. Its seeming commitment to a bicultural society fascinated me and I wondered where similar opportunities to share and honor each others histories and cultures might present themselves.  I look forward to fruitful mariners research and to my return but hope that I will be entertaining some New Zealanders in the near future.