July 5 – the day after… Having crashed at 9pm, I was up and out of the house by 6am.  It was cool, windy, and no mosquitos. Crissy soaked her Bog boots during the harvest and borrowed my extra pair, so I went to town in flip-flops.  Was quite nice. I worked for about 6 hours from the firehouse, while everyone in town was recovering from the day before.  Then the Fourth of July festivities (that had been cancelled the day before because of the hunt) were resumed.  First up, the competition for best “float” was announced. Two ATVs were dressed up and ready to go but a late entrance by community elder Bertha (aka Morita) and her granddaughter made it three. She strapped two carved strips of bowhead baleen to the sides of her ATV and a fox skin to the front. The Pequots and I rode on Marjorie’s float through town. Afterward, Nathan Sr. led the kids activities in the community building including running races for the kids in all age brackets and egg in spoon balancing races. Adults did the same in the afternoon. I dashed with egg in spoon and came in a remarkable 2nd place.  Later in the afternoon we had a barbecue for the whole community and then the community drummed and did Eskimo dancing for us. We all tried to learn some and little Elmo called me out and showed me the moves! We presented the community gifts including the Mashantucket Pequot story blanket, the Pequot book, and a wampum pendant that Jimmy Jones made with a beluga tail. The latter meant to signify a bond between Point Lay and Mashantucket.   We spent a bit of time at the end of the evening saying our personal goodbyes to the village, hoping to see them soon.

Brenda on her baleen “float.”

BBQ at the Inupiat Community Center.

July 6 – Got up and began to pack. Today we leave Point Lay.  Got some work done at the firehouse. Most of the community slept till mid afternoon (with 24 hours of sun, people – kids as well – stay up very late).  Tracy wanted to interview all of us beginning around 1pm. The Pequots and I met to discuss who we would present wampum to individually and then made our final rounds of visiting.   Crissy and I brought a wampum pendant to Robert Lisbourne, since he was so generous with his time and knowledge. I had also asked if I could photograph the harpoon that his dad had made and used for the hunt.  He brought us outside and reassembled the harpoon and I got my shots.  Final packing and Robert Suydam brought our luggage to the airstrip on the ATV and in its trailer.  On our walk to the airstrip, Robert Lisbourne caught up to us and gave Ashanti and I a lift on his ATV. He was delivering a 5-gallon bucket of muktak to his aunt in Barrow. He asked if I would bring it. When we arrived, she and her husband were there to greet us and I handed the bucket off. Inupiaq folks distribute their bounty/shares willingly to other family members across the region and even as far away as Europe.   We spent the night resettling in the ARF. 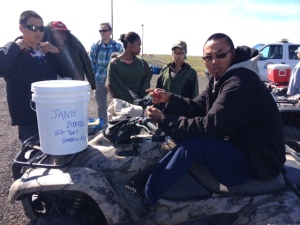 July 7 – Back in Barrow at the ARF. Cooler, no mosquitos.  Leslie arranged for a tour of the Barrow vicinity including a ATV trip with Craig George, Todd, Ryan, Yosty, Shane, and others.  Headed through the fishing village of Pigniq.  Continued north to the top of the world and approached a huge pile of bowhead whale carcasses including the remnants from the hunt two weeks ago.  We stood off a ways and with binoculars scanned for polar bears. Several of our companions were armed as a safety precaution. None sighted. Ryan (with Crissy aka “Polar Bear Bait” Gray) did a circle around the carcasses to check for any sleeping polar bears before we went closer.  We surveyed the area and saw lots of bones from prior years and located areas nearby with polar bear tracks. Seals were in the water and a French vessel could be seen in the distance locked up in all the sea ice.  It was very windy and cold (I would guess low 30s). Craig grabbed some of the old whale blubber and he and I with some wind blockers got a blubber fire going. Intensely hot! And heard stories about peoples fireplaces and stoves being damaged from the intensity of the heat.  Several stayed warm by the fire but after a short stay, the Pequots and I headed north to the geographic northernmost point in the United States…and then climbed on some sea ice to go just a little more.

Back in time for a barbecue at the end of the day with all of the folks involved with Ilisagvik College and ARF.  In the meantime, Robert, Tracy, and Andy had returned from Point Lay.

Scanning for polar bears at the whale carcass pile.

Top of the world!

Standing on sea ice at the top of the world.

July 8 – up early and visited the Inupiat Heritage Center and got a tour of the Whaling Exhibit from collections management staff member Diana Tigiksrauq Martin.  Her brothers are some of the local whaling captains and she spent a couple of hours with us discussing Inupiaq culture and whaling traditions. The whaling exhibit was impressive and I took lots of pictures since I didn’t have time to browse at my pace.  We visited the artist’s workshop at the cultural center and met Vernon Rexford and some other folks. Vernon’s carving/etching/engraving work with ivory, baleen, and mammoth tusk is nothing short of remarkable. He is self-taught artist who told me that, when he was seventeen, he was given a piece of polished baleen from his father (a whale captain). He etched it and his father sold it for an excellent price.  That was the beginning of he career and now he works on commissioned pieces with requests from all over the world. 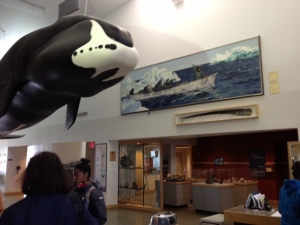 Lobby of the Inupiat Heritage Center. 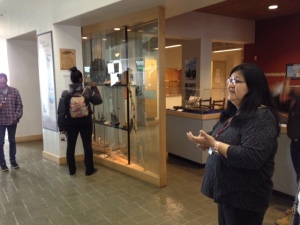 Favorite painting of the day!

Vernon Rexford in the IHC workshop.

Vernon with his walrus tusk carving.

We were also notified that the Mayor of the North Slope Borough, Charlotte E. Brower, was available to meet with us. We were eager to share our experience since the Mayor’s office is one of the principal funders of the Point Lay educational exchange with Mystic Aquarium and Mashantucket.  Mayor Brower, whose husband’s family are some of the principal whaling families of Barrow, was wonderful and spent the first few minutes of our discussion showing us (gathered around her computer) photographs that Inupiaq kids had taken that year.  She was very hospitable and was interested to hear about all of our experiences.

Stopped back at the Inupiat Heritage Center and bought a book about Craig George’s work on whale science. I noted other great books to add to my library.  Ran across the street to the AC supermarket and purchased some baleen art from Earl Aiken, an Inupiaq elder, who sits in the lobby with his work and chatting with visitors. 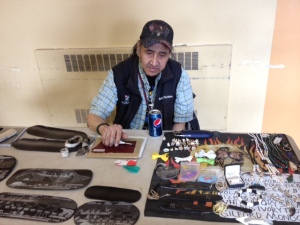 Leslie brought us through the Ilisagvik Community College and introduced us to all of the faculty and staff.  Then we gathered the others and dropped our bags at Barrow Airport. The girls wanted to stay at the airport and Leslie took Ashanti, Shane, Yosty, and I for a final drive around the Barrow areas we did not see during out time in Alaska.   Then headed off to the Barrow Airport for our flight home – Barrow > Anchorage > Minneapolis/St. Paul > Hartford.   Time to rest and recalibrate for more travels next year…